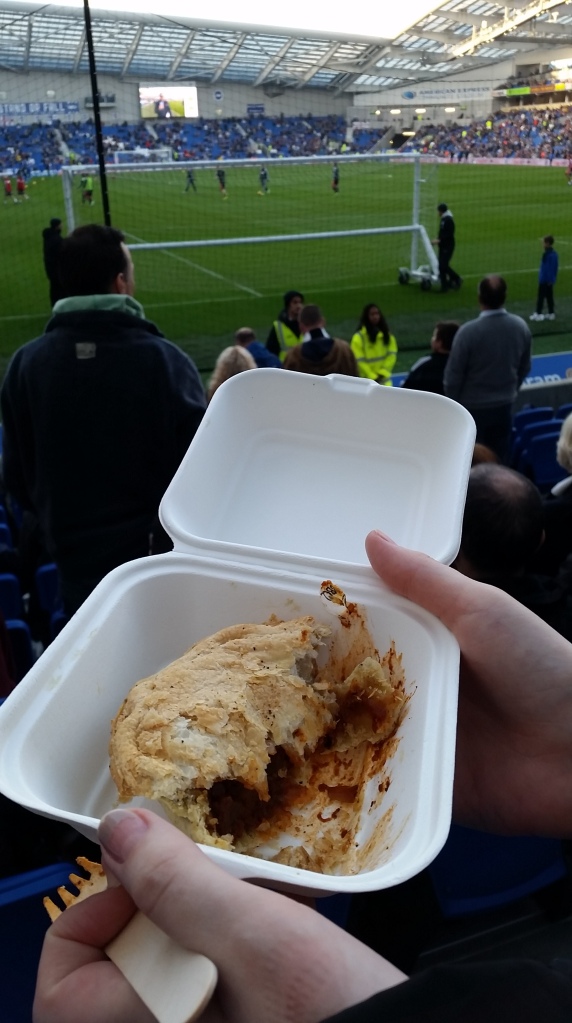 Ground: The Amex Stadium
Competition: 2014/15 Sky Bet Championship
Result: Brighton 1 – 2 Fulham
Pie: BBQ Pulled Pork
Price: £4.2o (probably less)
Comments: Looking at the fixtures at the start of the season it was clear to most that Brighton was the most anticipated away day of the Championship. Maybe it was the prospect of visitng a new ground, maybe it was the fact we might actually win or maybe it was the fact we all like to be beside the seaside. Whatever the reason, the Amex away end was filled to the brim with over three thousand Fulham fans in attendance.

I’d heard rumours of award winning pies from the mouths of unreliable sources like pub drunkards and pirates facing the gallows on a remote Caribbean Island, yet I’d never truly believed them. But then I saw it myself, the rumours were founded in reality.

A guest pie was on offer, a pie that changes with every visit! This was the most innovative idea in football since the backpass rule or that really shit Henry/Pires penalty back heel thing. This week’s offering was, wait for it, BBQ pulled pork. This was the most excited I’d been for a pie since I ate two at Stoke in 09.

The pie’s pastry was sound, nothing spectacular, but once I bit inside the true brilliance become glaringly apparent. Juicy chunks of stringy pulled pork lathered in a succulent, flavorsome mix of sweet potato, onion and a sweet BBQ sauce. As co-reviewer Nick Smith quipped, “it’s a bit like Coq au Vin”. You’re not wrong Nick, you’re not wrong. A trendy, BBQ coq au vin hybrid. Genuinely one of the best pies of my reviewing career.

I expect most people missed out on enjoying their pies as they were probably too busy trying to take gloating Darren Bent’s head off with one. Luckily goodness prevailed and Fulham got the last laugh, cancelling out Bent’s opener with a 2-1 win. A top pie, great win, trip down to Brighton and two fingers to Bent make for a sterling away trip. The day was topped off with a trip to see Morrissey at the 02 in the evening- Heaven Know’s I’m Not Miserable Now.