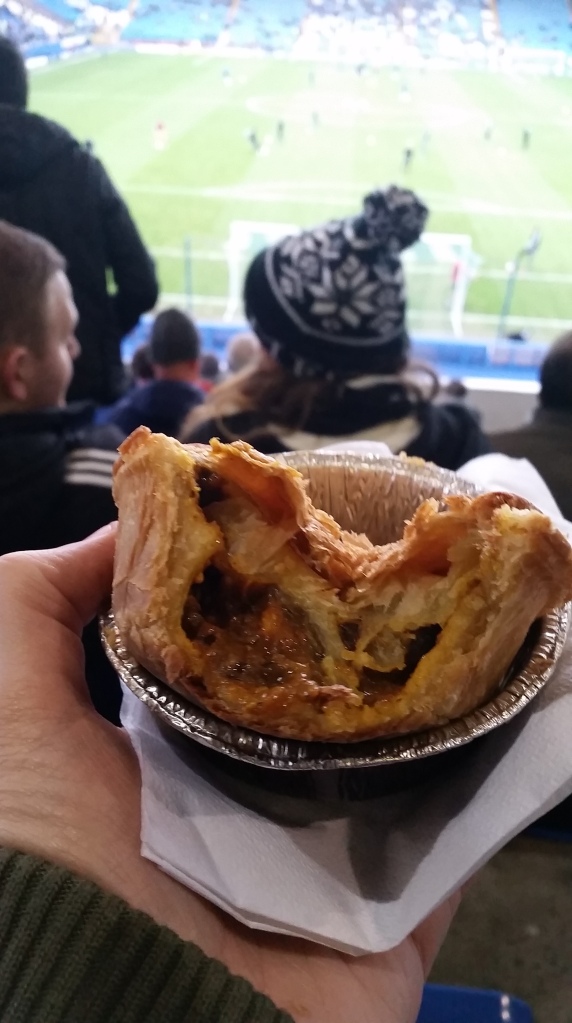 Ground: Hillsborough, Sheffield Wednesday
Competition: Emirates FA Cup 2015/16
Result: Sheffield Wednesday 2-1 Fulham
Pie: Chicken Balti
Price: £3.00
Comments: In the miasma of misery that is Fulham’s 2015/16 season the trusty FA Cup looked like a rare moment of solace in an otherwise unrelenting piss factory. My hopes for the cup weren’t anything ambitious like winning the trophy or even reaching the fifth round. I just wanted a novelty away day to minnows like Blyth Spartans or Eastleigh, perhaps even a home draw against Manchester United or Chelsea – a return to the triumphant days of losing to decent sides rather than unsettlingly average ones like Preston, Wolves and Charlton.

I arrived at Hillsborough, for what felt like the 17th time in the last few years, with a renewed sense optimism about our cup tie. With one win in twelve there didn’t seem much to inspire hope, but at long last we had a manager. You know, one of those blokes who organises the team and tells them what to do. They’re quite useful I hear. Former Watford manager, Slaviša Jokanović is the brave-verging-on-foolhardy man to pick the up the pieces left by the destructive legacy of Felix Magath’s insanity, Jol’s jovial ineptitude and Kit Symons’ hands in pockets charisma.

While Fulham’s manager changes by moon rotations, the pies at Sheffield Wednesday remain a stellar reenactment of Groundhog Day. Same ground, same price, same shit.  The whole pastry ambiance was unaided by the prison canteen style concessions stands where the pies were imprisoned in their dubiously effective ovens. Once freed by my bail money of £3, the pie looked a little worse for wear around the edges. The burnt rim probably a battle scar from a prison yard run in with some nasty bastard like Carlin from Scum, or, more likely, where it had been left to frazzle a little too long. This did at least mean it was piping hot. The sort of hot that hides in the depths the molten curry filling, waiting for your unsuspecting mouth to make contact before burning all the skin off it. The top of my mouth still resembles a shedding Anaconda.

Once you hosed the heat off with a fire extinguisher, the filling itself was quite moist indeed. Rolling the soft pastry in with the plump chicken strands made for an excellent complimentary approach to enjoying your pie, both elements working in perfect tandem. Ultimately though, this was a bog standard Pukka Pie. The pastry equivalent of Danny Gabbidon or Wayne Routledge; inescapably mediocre, predictable and ubiquitous. Still, at £3 you can’t expect too much, nor can you go too far wrong.

Of course, Fulham failed to meet even my lowest expectations on the day (a draw) and lost to Sheffield Wednesday for the third, and final, time this season. The cup dream is over, back to the Piss Factory of league football. Maybe I should follow punk poet Patti Smith’s advice on the Piss Factory below and give up on Fulham’s endless milieu of disappointment: